St Michael and All Angels Church dates back to the mid-19th century. The creation of a third church in Abingdon was brought about by the vision of the Reverend Nathaniel Dodson, MA, (1787 - 1867) who was vicar of St Helen's and rector of St Nicolas' for over 40 years. It seems that Rev. Dodson was a hard-working and energetic man who did much good in the town of Abingdon, trying to ease the strictures of the new Poor Law as a member of the board of guardians of the workhouse, and fighting against fraud and malpractice in the running of the gaol. He campaigned to raise money for new churches at Dry Sandford, Shippon and in Abingdon itself; also for parsonages to house the clergy and for two new schools.

The Reverend Dodson was a determined and resourceful man. Needing to raise quite a large sum of money for his projects, he decided to appeal to the gentlemen of the county:

"It is hoped that the singular privilege enjoyed by Abingdon of being situated in a County which has the honor (sic) of containing the ancient residence of our Sovereigns, and being in many parts so richly studded with Mansions and Villas of different Nobility and Gentry, will insure abundant contributions in support of the proposed improvement in its means of Public Worship and Pastoral Superintendence. It is hoped that every Gentleman in the County of Berks will make some contribution proportionate to his means, for the relief of the spiritual destitution of the County Town of his own Shire". In a letter dated March 14th 1849 to the Rev. Thomas Farley, Rectory House, Ducklington, Witney, on the same subject, Mr. Dodson wrote :- "I hope to have a Committee in every (?) town in the County, and I have a strong claim on the Crown, not only as Patron, but as the owner, in the person of the Prince of Wales, of one third of the land and that stolen from the Church by Hen: 8. [1]"

By the nineteenth century manufacturing and service industries were flourishing in Abingdon. Buildings spread along Ock Street and courts began to develop on the land behind. This was where labourers and craftsmen found their homes, and often their livelihoods. "Over time, some courts developed into crowded groups of modest dwellings, sharing a privy and water supply. Others housed workshops. The local industries included sack-weaving, leather-working, rope-making, malting and brewing". [2] (The courts were demolished shortly before WW2 and residents moved to the then new council estate in Saxton Road.)

The new workers, Dodson thought, needed another church in which they could worship, the two town churches being insufficient to cope with the increased population. He negotiated with Christ's Hospital for land in what is now known as Albert Park, land which was near the homes of the workers. Although Dodson had conceived of his plan in the 1850s it took much time and effort to raise the necessary funds and agree the purchase of the land (Dodson himself contributed £100 of the £2500 cost) so building did not start until 1864 and was completed in 1866. The church was designed by Gilbert Scott (who also designed the Albert Memorial and St Pancras Hotel) and 'was duly consecrated and dedicated by the Bishop on 25th January 1867.' [1]

25 January 1867: consecration of the church building

1878: construction of a reredos (Edwin Dolby) and chancel screen

1908: re-roofing and extension to the choir vestry

2008/9 The church was extensively reordered prompted by identification of a serious problem with the floor timbers. At the same time it was decided to replace the pews with moveable seating which, as Canon Peter Doll argues in his article 'The Temple of His Presence' in Pews, Benches and Chairs, Church seating in English parish churches from the fourteenth century to the present, sets the church free from the constraints of fixed seating and allows a much greater flexibility of use - not only for services but also for community activities.

At the same time, a 24-foot diameter labyrinth was constructed inspired by examples in Chartres and other cathedrals. This has become a focus of much of our spiritual reflection. 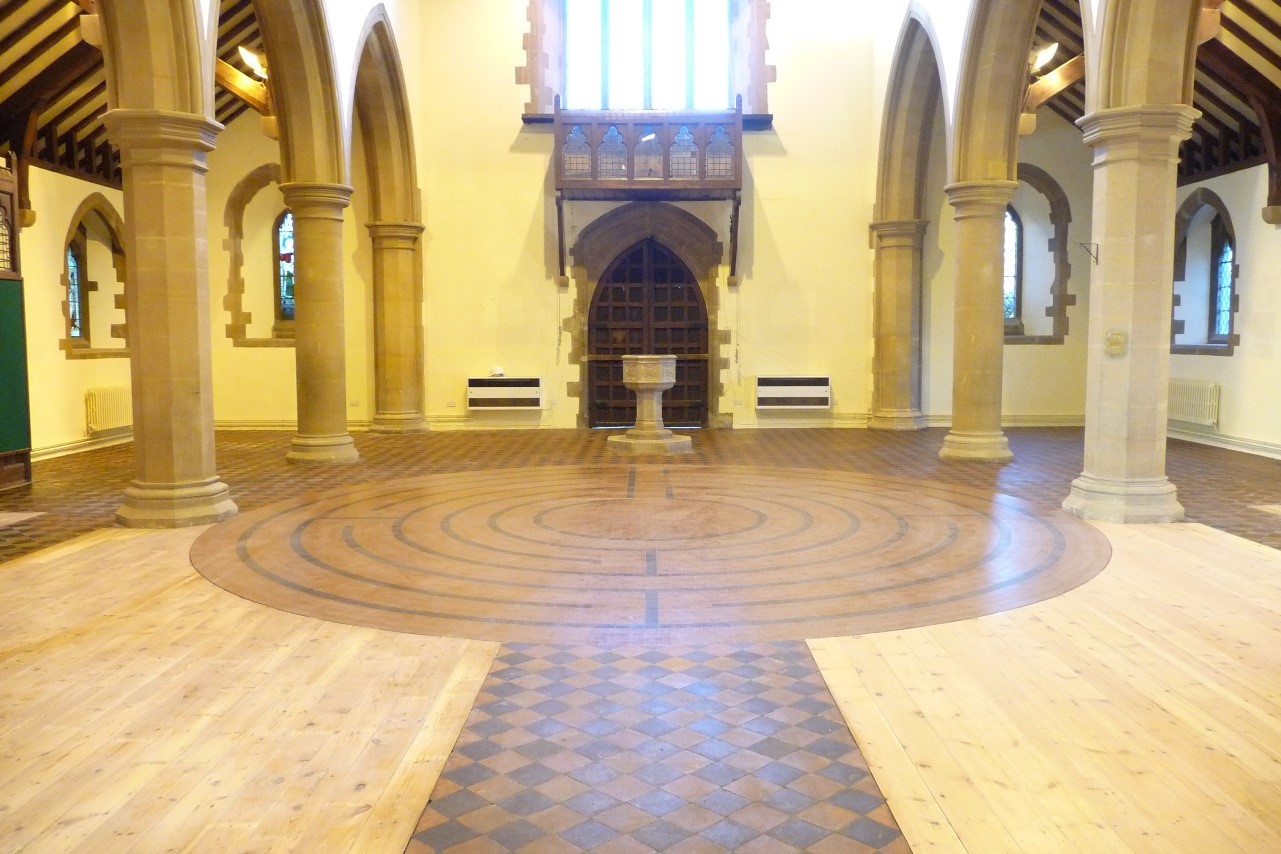 2015: A nave altar was designed and constructed by Bates and Lambourne of Thame, local furniture makers.

2017: the bells were repaired and restored.

We have a fine set of 'Stations of the Cross', produced by the craft workshop of 'Faith Craft', probably in the early 1930s.

The paintings on the east wall were added in 1883, by a Mr F. Drake of the Cathedral Close, Exeter.